Welcome to CCBE | About | Page of the President

The European Commission and the Austrian Presidency of the Council of the European Union 2018 jointly organised a conference on the effectiveness of justice systems on 29 and 30 November 2018, held in the capital city of Austria. The main aim of the conference was to highlight the independence of the judiciary,  and the quality and efficiency of justice systems in the European Union and its Member States, elements that are crucial for upholding the values upon which the EU is founded, for the implementation and observance of EU law, for mutual trust between Member States, and for an investment-friendly environment.

This high-level, well-attended conference examined how the EU can further improve the independence, quality and efficiency of justice, and also how to ensure that any justice reform aiming to enhance those elements should uphold the Rule of law and European standards on human rights, including the protection of fundamental rights and freedoms. The CCBE was invited by organisers to the first and most representative morning panel with two keynote speakers – Minister of Justice of Austria Josef Moser, and EU Commissioner for Justice, Consumers and Gender Equality Věra Jourová. CCBE President Antonín Mokrý gave a speech just after the speech of President of the European Court of Justice Koen Lenaerts, and President of the European Network of Councils for the Judiciary (ENCJ) Kees Sterk. Other speakers in the first panel were Lead Counsel and Advisor to the World Bank Representation to the EU Daria Goldstein, Deputy Head of Division, Directorate for Public Governance (OECD) Tatyana Teplova, and President of CEPEJ Georg Stawa. Antonín Mokrý, on behalf of the CCBE, focused in his first contribution on the relevance and impact of Rule of Law deficiencies on citizens and businesses and showed several concrete examples of how the blurring of lines between the State and the judiciary impacts on short-term, and even more importantly on the long-term prospects of the growth of an economy, and how a lack of judicial independence may undermine the principle of equal treatment and procedural fairness. He outlined how the absence of independence, the low quality and low effectiveness of a justice system can be detrimental for a country´s economy, for its population, for the attractiveness of a country for foreign investors. In the second part of his speech, he reflected on quality and effectiveness, trying to identify Key Performance Indicators (KPIs) for justice systems to be measured. Not only justice systems, but also other justice actors, such as lawyers, must be independent and protected from undue interference by States in order to properly perform their role in justice systems. Antonín Mokrý then listed the crucial standards that must be observed and applied within the state being governed by the Rule of Law, in particular as regards the profession of lawyer. In their speeches, other speakers tackled other criteria to be assessed in order to improve the quality of justice; these included the accessibility of justice, adequate resources (financial and human, including sufficient financing of legal aid by the state), adequate training of judges and court officials, effective assessment tools (e.g. monitoring and evaluation of court activities, use of surveys, etc.) and appropriate standards in place (e.g. timeframes, information to parties about their case, etc.) Other speakers highlighted the positive role of the EU Justice Scoreboard, the e-Justice Portal, as well as European judicial networks, including ACA-Europe (the Association of Councils of State and Supreme Administrative Jurisdictions of the EU) who have recently started examining the topic of quality of judgments more closely than ever. The European Commission has been supporting projects which collect national practices on further improving justice systems. Four projects, 1) Court Quality Framework Design project, 2) Best Practice Guide for managing Supreme Courts, 3) Court Management, and 4) Handle with Care have examined and gathered practices and indicators used by national courts, Councils for the Judiciary and Ministries of Justice for measuring and increasing different aspects of quality of justice, such as providing information on justice systems to citizens and businesses, communication strategies, legal aid, the use of ICT systems, case and court management, and the publication of judgments.

The afternoon Panel of the conference was dedicated to the topic of “Risks and opportunities of digitalisation in the judiciary“. The panel was opened with very interesting speech delivered by Christoph Grabenwarter, Member of the Venice Commission and Vice-President of the Austrian Constitutional Court. He disclosed some interesting points regarding the activity of the Venice Commission, as well as some general notes on the functioning of justice systems in different jurisdictions of the EU. The use of ICT (Information and Communication Technology) was further explored by Judge of the Supreme Courts of Scotland Lord Tyre, Lawyer and Co-Founder of Avocatoo Ana-Maria Udruste, the Head of Digital & Tech Law at Darian DRS, President of the Slovak Bar Tomáš Borec, and Secretary of the CEPEJ Working Group on the Quality of Justice (Council of Europe) Clementina Barbaro. The speeches focused on ICT developments in the judiciary, such as ensuring access to judgments online, that increase the transparency of justice systems and contribute to increased consistency in case law. Detailed talks were also held on the subject of Artificial Intelligence (AI) and the CEPEJ study commissioned by European Commission. It was mentioned that the use of algorithms in European justice systems remains primarily a private sector commercial initiative aimed at legal departments of companies (in particular insurance companies), but has also been introduced into law firms and is aimed at individuals. The main areas where AI is already applied include advanced case law search engines, online dispute resolution, assistance in drafting deeds and contracts or analysis in specific cases, detection of divergent or incompatible contractual clauses, and “chatbots” to inform litigants or support them in their legal proceedings. The issue of predictive justice was also debated. The CEPEJ speakers spoke positively about AI development, while some of the judges participating in the discussion were more sceptical and showed careful reluctance when speaking about using AI advanced tools in the judiciary, stating that it should not be underestimated that the processing of judicial decisions in structured computer databases may pose certain risks and therefore requires appropriate safeguards if introduced. Concerns raised also related to issues of confidentiality, privacy, protection of personal data, risks of discrimination and the ranking and profiling of judges and lawyers. When designing and applying AI in courts, it will be essential to guarantee the respect for the right to a fair trial (Article 47 of the EU Charter of Fundamental Rights) and EU data protection rules (General Data Protection Regulation and the Data Protection Law Enforcement Directive). Some of these concerns had similarly been very clearly set out in the speech of Lord Tyre and subsequent comments from other judges (mostly from UK jurisdictions).

The participation of the CCBE President in the conference was very important, not only for the recognition and visibility of the CCBE, but also for fostering links with various stakeholders who play an important role in the administration of justice throughout Europe and with EU official representatives. 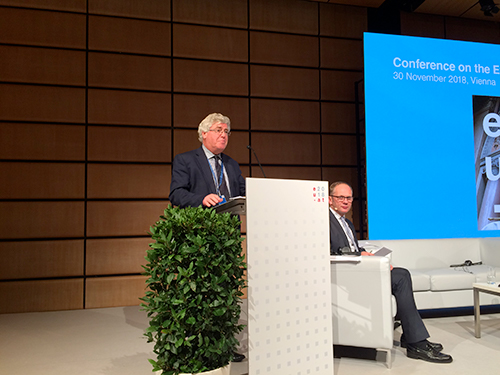 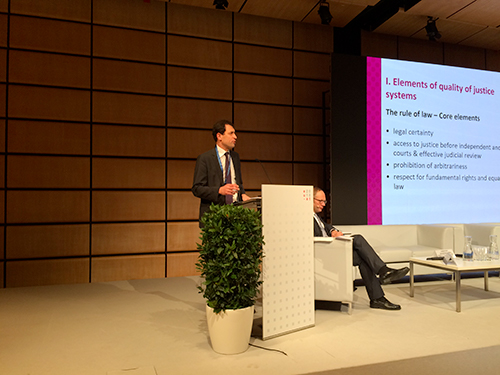 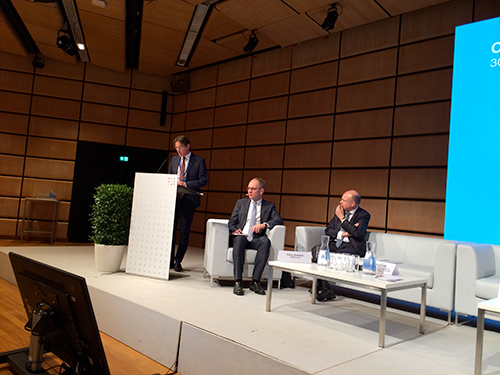 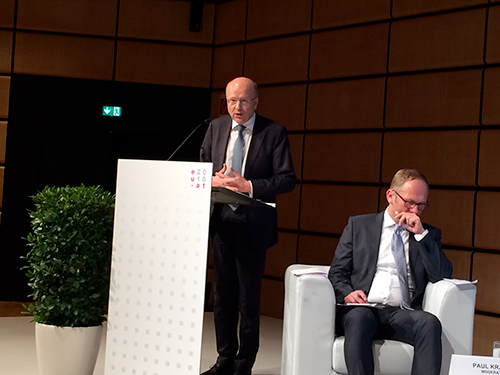 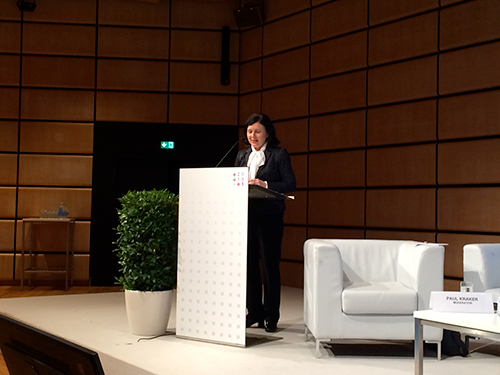 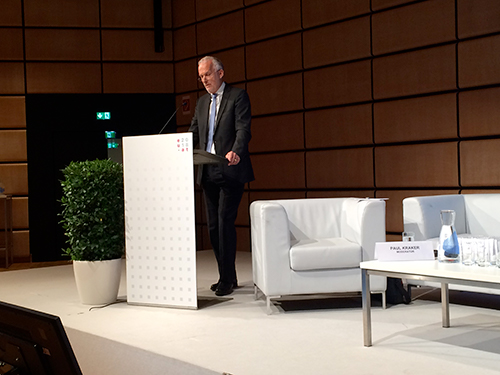 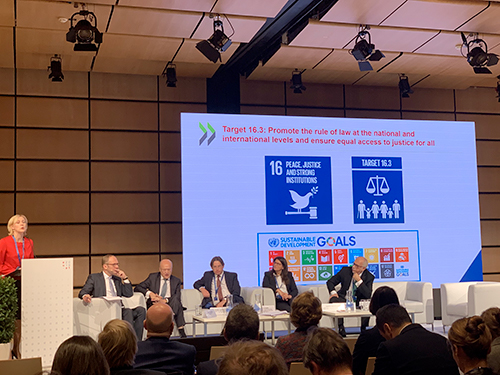 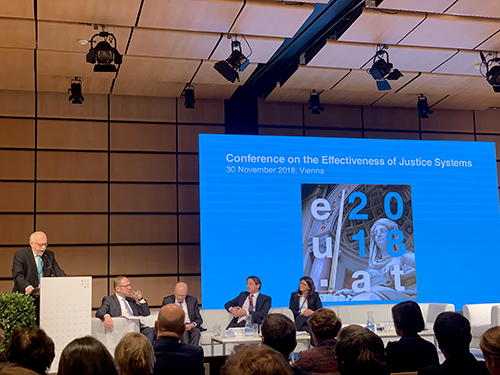