Defence of the defenders 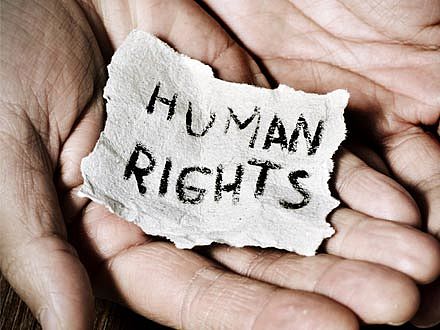 Permanent Delegation to the European Court of Human Rights 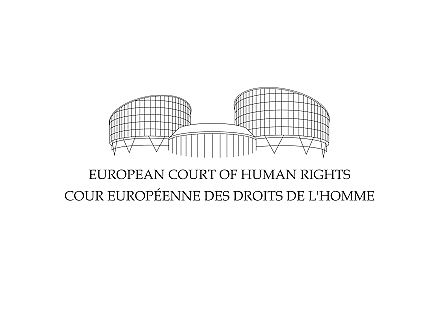 Threats on the Legal Profession 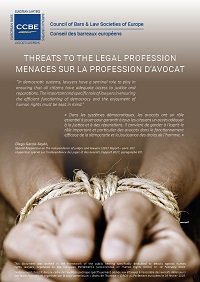 Every day, lawyers are harassed, threatened, prosecuted, imprisoned or even murdered, simply for carrying out their professional activities. In recent years, these attacks have intensified around the world, including in Europe. On 19 February 2019, a hearing specifically dedicated to attacks against the legal profession was held by the European Parliament’s Subcommittee on Human Rights (DROI) in Brussels. The hearing highlighted the different types of persecution perpetrated against lawyers, drawing on examples from countries where lawyers are victims of human rights violations. This event also provided an opportunity to present and evaluate the European Union’s existing tools to assist lawyers and, more generally, human rights defenders around the world. The brochure opposite was published to mark this hearing.

CCBE Webinar on the situation of the legal profession in Turkey – 10 December 2020:

Program of the event

10/12/2010: CCBE Statement on the situation of the legal profession in Turkey

On the occasion of International Day for Human Rights, the CCBE urges the Turkish authorities to uphold the rule of law by bringing an end to the persecution of lawyers and by refraining from taking any measure which would have the effect of hindering the independence, integrity and freedom of expression of the legal profession in Turkey.

27/11/2020: Statement concerning the killing of Tahir Elçi (CCBE Human Rights Award 2016) and lack of effective investigation into his death

10/11/2020: Joint Statement in support of the Turkish lawyers in the CHD I trial

Statement by Birgit Van Hout, UN Human Rights Regional Representative for Europe at the CCBE Plenary Session of 4th September 2020: “International human rights, the rule of law and civic space in the EU”

01/09/2020: The Council of Bars and Law Societies of Europe (CCBE), the Law Society of England and Wales, Bar Human Rights Committee of England and Wales, Lawyers for Lawyers, Lawyers’ Rights Watch Canada, and the Institute for the Rule of Law of the International Association of Lawyers (UIA-IROL) are gravely concerned about the recent threats received by the lawyer, Reinaldo Villalba Vargas, and his legal team from the “Colectivo Jose Alvear Restrepo” in Colombia.

On 18 August 2020, several bars and lawyers’ organisations, including the CCBE, addressed a letter to several UN Special Rapporteurs requesting that they urge the Turkish authorities to do everything in their power to guarantee lawyers Ebru Timtik and Aytaç Ünsal a fair trial, ensure their good health and eventually restore their freedom. The undersigning organisations further request that the UN Special Rapporteurs urge the Turkish authorities to stop all forms of harassment, including judicial harassment, against these lawyers as well as other lawyers and human rights defenders in Turkey, and allow them to perform their professional duties without intimidation or improper interference.

On 18 August 2020, several Turkish bar Presidents visited Ebru Timtik and Aytaç Ünsal currently on hunger strike and in a very critical situation. On that occasion, a press conference was organised where a statement from the CCBE President was read by Turkish bar Presidents alongside their own messages and messages from other bars and lawyers’ organisations  in support of these two lawyers.

The undersigned organisations have been following recent developments in the cases of human rights lawyers Ebru Timtik and Aytaç Ünsal, who have been on hunger strike since February 2020 to strengthen their demand for fair trials and the administration of justice in Turkey. The undersigned organisations are gravely concerned for the safety of Timtik and Ünsal and urge that the Turkish government act quickly to ensure their rights. 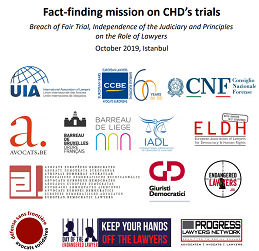 The CCBE co-signs and supports the final report of the fact-finding mission that took place from 13 till 15 October 2019. This fact-finding mission was composed of a group of 15 lawyers from 7 European countries who met in Istanbul to clarify the legal circumstances that led to the conviction of the following 18 Turkish lawyers by the 37th High Criminal Court of Istanbul in March 2019. The European lawyers of the monitoring team came from Austria, Belgium, Catalonia/Spain, Greece, Germany, France, and Italy. They represented, among others several International, European and National lawyers’ organisations and Bars and among which the CCBE was represented.

Press release: European Fact-finding mission to clarify the circumstances leading to the conviction of 18 Turkish lawyers 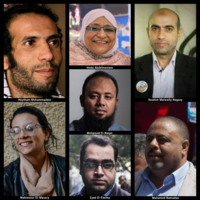 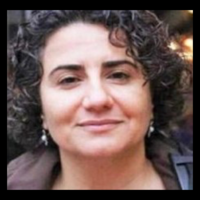 Speech from Diego García-Sayán, UN Special Rapporteur on the independence of judges and lawyers